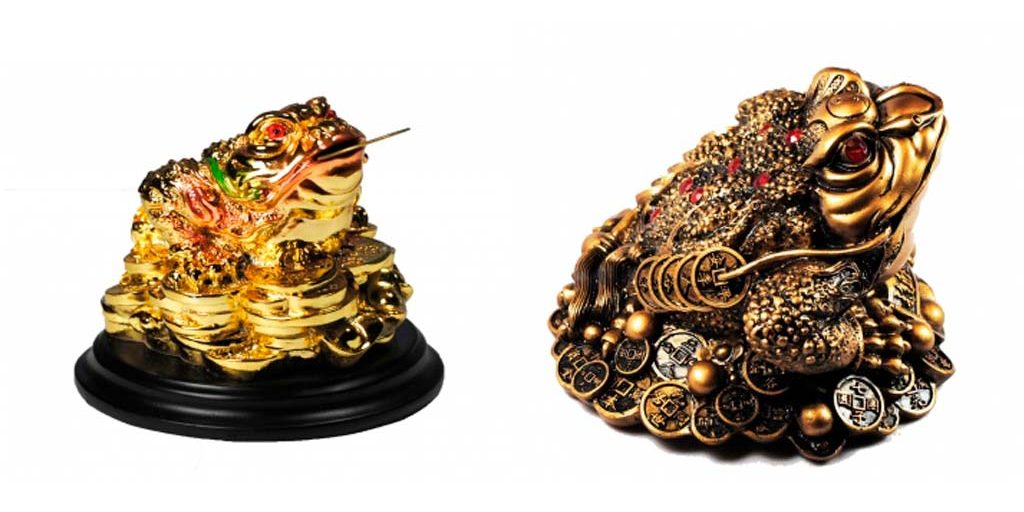 Few symbols embody feng shui the way the three-legged toad does. And whether you call this little amphibian a wealth frog, money toad, lucky money frog, or three-legged prosperity toad doesn’t matter. What matters is that you display this delightful creature wherever you want wealth to find you.

Like many symbols in Chinese lore, the money frog came from a legend. The legend is about a frog named Chan Chu. The story begins that a wife of one of the eight immortals stole the elixir of immortality and fled to the moon. When she drank the elixir, it turned her into an ugly toad. Compassionate gods allowed her to keep the tail of a tadpole, or third leg, versus two legs of a fully developed toad.

The toad, Chan Chu, liked money, too, and was tempted into a well with gold coins. One reason wealth frogs are said to be associated with money is that they can always be found where there is water. And because water means wealth, the relationship of wealth and water were associated with the toad. It’s also said that the money frogs looks like a fat coin purse, further enhancing the frog’s connotation of wealth.

Chan Chu was also associated with the moon, the ultimate feminine force and legend says swallows the moon during an eclipse. But it’s the money aspects that make this frog so popular.

The wealth toad represents good news about money and has a celestial connection.

Many wealth toads are shown with small indentations on their backs, and often contain jewels. This represents the big dipper and its water and wealth-giving connection. In Chinese lore, some say a full moon brings the toads out and that when they appear, good news about money follows shortly thereafter. It’s also legendary that if you scratch the ground with a toad’s foot, a spring will erupt there.

The wealth toad can assume many forms in feng shui. Sometimes the toad is shown sitting on a bed of coins, and other times he is shown sitting on a bagua or holds strings of coins or gold ingots. Perhaps the most interesting aspect about the lucky money frog is their association with bad luck in finances. Chan Chu symbolizes protection and turning bad luck that causes money problems into good luck. The money frog is believed to help people end troubling bills, poor financial habits like overspending, and difficulty attracting money.

What’s most important is that the toad is placed properly in the residence. Do not place the toad on the floor, but always position the toad to look toward the door so it can gulp up money chi for the house. Position your wealth frog in the lucky corner of the room. This is the spot of greatest energy and is typically diagonal to the door and where chi is the most concentrated. If you’re interested in good news about investments, place the frog in the southeast corner of your living room. Business opportunities and career news is enhanced when a lucky money toad is placed in the north corner of generating income in your living room.

Where not to place your toad

Almost as important as where to place your money frog is where not to place it. Avoid placing the toad directly opposite the door as the energy is too strong. Instead, place a frog in the lucky corner of the room. Avoid placing your frog on the floor. Instead, place it on a low table, such as a ledge or coffee table. Looking for a large boost in your finances? Place nine of the frogs in important areas of the house, such as the wealth corner, the living room, your home office or dining room. Avoid placing a wealth frog in the bedroom or the kitchen as these are not believed to bring good luck. Place a luck frog in your office next to your desk for more income and for good financial news.

In order for your toad to bring the best luck, it must be activated. Try placing your toad on red paper or tie a piece of red ribbon around it. If the toad has red jewels on it, it is already activated. Another key piece of the lucky toad is its coin in its mouth. Make sure your toad has a  Chinese coin in its mouth (a small dab of glue will help it stay there) and be sure the coin is turned with the Chinese writing up. Most Chinese coins have Chinese writing on one side and four symbols on the other. The symbols should always be on the underside with the Chinese writing turned up.

The Southeast Corner the Feng Shui Corner of Wealth, Prosperity, and Earnings Luck
March 9, 2021
Looking for something?