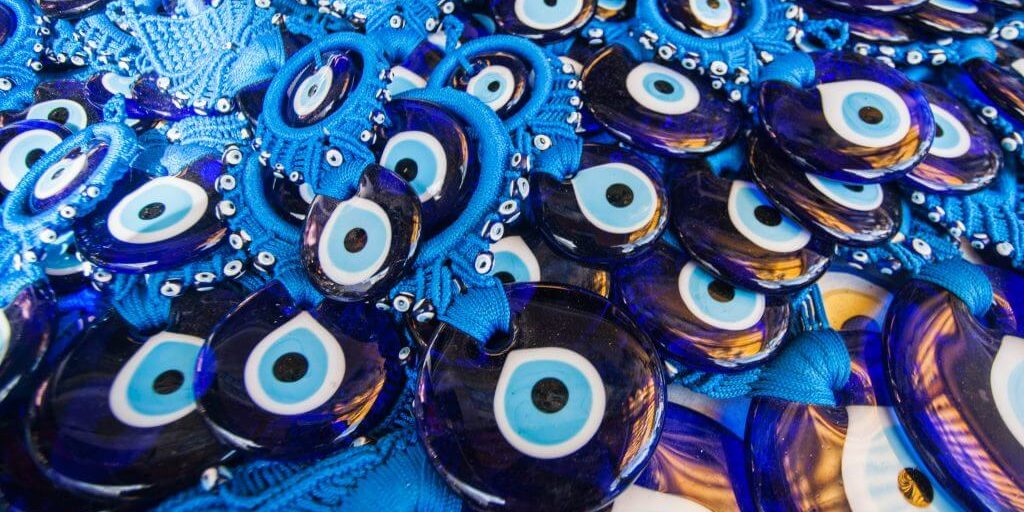 If you’ve ever been around a negative person, someone who compliments you in a hollow way or who admires what you have with an envious stare, you know what it feels like when a person’s intentions aren’t positive.

Sometimes you may find that after you’ve left someone you feel physically bad, have a foreboding feeling, or somehow feel weakened by their presence. This person may harbor ill thoughts against you.

Many cultures and countries recognize this energy as the “Evil Eye.”

From Tibet to Greece, from Turkey to Brazil, the concept of the evil eye is the belief that someone’s envious gaze and thoughts can create negative consequences such as injury, illness, unhappiness, or loss.

In its worst form, the jealous glances cause a withering effect of the psyche and physical form.

In Aegean countries it was believed that those with green eyes could cast curses. In the Jewish custom speaking about good fortune could also draw negativity and jealousy to you.

Regardless of whether you believe that someone’s negative intentions can harm you physically or emotionally, we know that we are drawn by another’s gaze.

A good example is feeling watched.

We intuitively know when someone is looking at us even when our back is turned. Knowing that, it’s not hard to understand how cultures could believe in the power of the evil eye – and of other’s thoughts.

The evil eye concept has moved into the feng shui realm and it’s common now to see the blue eye talisman displayed in Asian emporiums. Commonly called a ‘nazar’ in Turkey, the blue eye is used wherever there is a concern of jealousy and is meant to provide protection against the withering, desiccating effect of the evil eye.

Nazars are often placed at the entrance to a home, in offices, carried on your person, or worn as a charm. These are displayed to ward off the negative intentions of others who may be jealous or envious of your looks, your possessions or your relationships.

In feng shui, the chi that surrounds us can be changed and influenced by those we come in contact with, so the concept of the evil eye and feng shui aren’t mutually exclusive. On the contrary, certain feng shui energies are commonly associated with the negative intentions of robbery, violence, and the lesser, but still painful injuries, of gossip, politicking, and rumor spreading.

With a difficult economy, the fear is real, whether that’s from someone who might want to rob you or your home or from someone who would make you look bad on the job to make their job more secure.

And, then, perhaps the worse person and intention of all? The person who simply delights in your misery and downfall.

If you’ve worried about the potential for theft, injury or slanderous talk, it might be worthwhile to display a nazar, the symbol that has become synonymous with protection against malicious intentions.

Another concern is the movement of the annual 7 Red Star.

This star creates all manner of misery due to it’s “cutting” energy. It can “cut” you by causing injuries by metal (cuts, car accidents, electric shock), animal bites, and harmful comments. Wherever the 7 star flies is where it does the most damage. If it’s in the north career sector, there could be injury by gossip or being “cut” from the company in the form of layoffs, or having a workplace promise made that falls through.

The 7 star it has the potential to harm you in myriad ways.

From a simple cut while chopping vegetables, to a dog bite, purse snatching, car injury, or identity theft. These are just some of the ways that harm can come to you. Teeth and mouth problems can also crop up when this star is active.

Not included on this list, but still a potential, is loss of relationships, a cutting off of income or prosperity, loss of a love relationship or loved one, arguments and hurtful words, or harmful gossip that hurts you socially, romantically, or in your pocketbook. Even petty theft, identity theft and credit card fraud could be a problem, making it so important to keep your handbag close and your eye on your accounts at all times.

Always be on the watch wherever this star flies — and use an evil eye with it’s withering, watery stare to drain the life out of this problem energy.

Planning to go on a trip? 😍 These Feng Shui travelling tips will definitely help you make it more excited 👇Travel Rituals for Pleasure. For travel to the,🛫 South: drink one glass of water or wash your hands before leaving the house🗻 SW or NE: Carry a cowrie shell for protection or tie a red ribbon on the handle of your suitcase for protection while traveling, or display a conch shell in the NW for more travel luck. I think those would be good to add and something people would likely do🧭 W or NW: Light a candle (red is best) or some incense, pointing them in the direction of your travel💕 E or SE: Ring a bell six or seven times in the direction you are traveling just before you leave🏄‍♀️ N: Put dirt in a small cup and throw it in the direction of north. You can also point a quartz crystal in this directionRead in detail at redlotusletter.com/travel-feng-shui-brings-luck-and-protection/#redlotusletter #fengshuitips #fengshuikatie #fengshuilifestyle #fengshuiliving #fengshuiyourlife #fengshuiconsultant #fengshui #watertiger #lifestyle #positivevibes #positivelife #positivity #positivelifestyle #lifestyletips #ImproveLife #life #tips #traveltipsandtricks #traveltips #travel #travelingram #travelblogger #traveladdict #travelawesome #traveldiaries #travellife #travelmore #travelgram #travelgoals #traveling #travelling #travelbloggers #travelporn #traveltheworld ... See MoreSee Less