Feng Shui Artwork | How Images in Your Home Influence Your Prosperity, Love, and Happiness

As a feng shui consultant, there have been many times when I’ve seen artwork that brings positive results to my clients’ lives. There are also times when I see artwork that negatively influences their happiness, their health, and in some cases, their life.

Even the placement of artwork has implications on what happens in your life and how you view yourself, if money is a problem or if your health suffers.

Why? Because what you see is often what you get in life.

When teaching my feng shui consultant training course, I often repeat this statement: energy flows where the eye goes.

If that energy is positive from an image, picture or painting, the flow is positive. If it is negative, the energy goes that way, too.

The accounts below are a few of some of my consulting clients and how the images displayed in their homes affected their lives.

One of my favorite private coaching clients often talked about how her life was reflected by the images she had around her house. She was unhappy in her marriage but had never really noticed how many images of a single, melancholy woman looking off into the distance were placed around her home, much like the image above of a solitary woman.

She wondered if those images where impacting her marriage, making her feel alone, isolated and forlorn herself. So, she set about taking those images down and putting up images of a happy couple, pairs of objects and got rid of the single, isolated woman.

She – and her husband – immediately noticed a difference and have remained married and are happy together.

Another client suffered from despondency, lack of a love relationship, and weight gain. After looking at her entire home, I couldn’t see a reason for her problems with depression, but there was one last room to see – her bedroom. It was looking fine, too, until we turned around to go back downstairs to the main living area.

That’s when I saw on the wall opposite the bedroom stairs was a large blue painting of a single woman crying.

Imagine, every day this woman went out into the world, the last image she saw was of a solitary crying woman. I’d feel isolated and depressed, too.

There were other things that were going on her life as well, like an over-sized collection of porcelain animals, which I believe grew along with her weight. She put her collection away, took down that painting, and then began working in a craft she’d always wanted to learn. She lost weight and moved into a new house and began a brand-new life.

Sometimes images can directly impact your health. One client had an image of a young woman with her chest ripped open and her heart exploding that her daughter had painted. It looked as gruesome as it sounds.

The image was painted in white, grey, red and black, which are very negative color pairings in feng shui. The client wondered why they had financial problems (the image was hung at the front door where money and opportunity comes in) and why her relationship with her daughter was strained. It’s not hard to understand why, is it?

However, because the daughter had actually painted this picture, this client didn’t want to part with it.

Many times, negative images and situations become almost magnetic, with the client being even more attracted to something that’s negative or bad for them.

This happens more than you’d imagine, and I think many times, people become attached to their problems or they can’t let go of things – even when those things may harm them.

As they say in the Buddhism, all suffering comes from attachment. This certainly illustrates that case.

Another client experienced severe health problems and had painted a picture of a man and woman. It was supposed to look romantic, I believe, and depict the couple that shared the bedroom. However, the woman was on her back and blue-colored with the man above her that almost appeared as if her were making a CPR effort.

Because of the health problems this woman experienced, the image of a woman on her back, and blue-colored (the color of death and lack of oxygen in the blood), I suggested she take down the picture.

She, too, was the artist and did not want to give up the painting and reluctantly agreed to move it out of the bedroom. 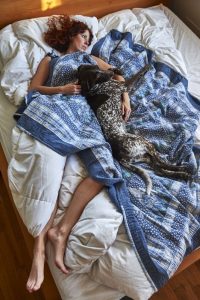 One 40ish client had a lovely home and I could see nothing that would prevent her from having a romantic relationship, though she was desperately single and truly desired a love relationship, having never married. Her dog’s toys, pillows, bowls and beds were all monogrammed and were in every room of the house. It was clear she was a pet-lover and was extremely attached to her pet.

However, upon entering the bedroom, it was clear there was only one center of her life: her dog. Over the bed in a large gilded frame was a very large oil painting of her beloved pet.

When I suggested that the bed is a symbol of romantic unity and love and that the painting should go elsewhere, she was very unhappy about that. So, the dog continued to share her bed and his countenance stared down at anyone who would potentially join her. She remained unmarried.

The marriage that ended

Another couple had images of their children covering the entire wall opposite their marital bed. Their love life was in the tank and they eventually divorced. Is it any surprise? A couple’s bedroom should only be inhabited by the couple in images and symbolism. Pictures of the children could go most anywhere else in the house, but should not be staring at a couple while in bed.

The out of balance family

Lastly, are two examples of families that were out of balance and where the children overtook the home and their role in the family.

One couple had only one child, who like the lovelorn example above, was the center of their life and all that they did. An over-sized image of this child hung over the fireplace in the family room. She was a petulant little girl, and the family did all they could placate her. A better image would have been a picture of the whole family or to replace her picture to another wall where she would have been less prominent. But there that picture stayed, and the couple eventually divorced.

Another couple had two boys in their late teens and twenties, a time when they should have been in college or working. Neither one had a job or did anything but smoke cigarettes and watch TV all day while their parents went to work.

The parents were unhappy over how they felt these young men didn’t have responsibility and seemed to lord over their parents and their home, demanding things of them and not willing to pursue a job or education.

Again, a very large, prominent portrait of the two young men was hung over the sofa in the living room, with their image depicting their over-sized role and domination in the household. Of course, not every large or prominently placed image means a house is out of balance, but when the house is out of balance and there is an image of a pet, person or persons that is over-sized, well, then, it’s time to take a second look.

This client removed the image, made other suggested changes around her house, and one son got a job and the other went into the military, and she and her husband divorced after many unhappy years together. However, she was very happy the way things transpired, even the divorce, and contacted me to tell me how happy she was to be moving on with her new life. 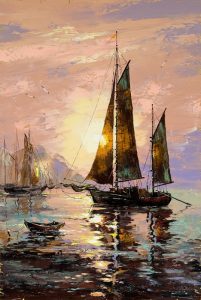 Look closely at your images and what they could convey about your life.

Violent, dark, sad or ill-colored images do not give your home the kind of energy that gives you health, vibrant living and love.  Add images that are aspirational. If you dream of owning a sailboat, add an image of a sailboat on water to set your sights on.

Learn from these clients of mine and how their lives were a reflection of what the symbols around their homes showed them and symbolized in their life. Give your house a good long look, and make sure it portrays what you want in your life or what it is you want to attract or retain.

Even if a picture or painting is of something negative and you want to hold on to it because you painted it, someone you loved painted it or gave it to you, just try taking it down, putting it in a closet or storage. Then when you see the changes that occur in your life, you might then be willing to part with it.