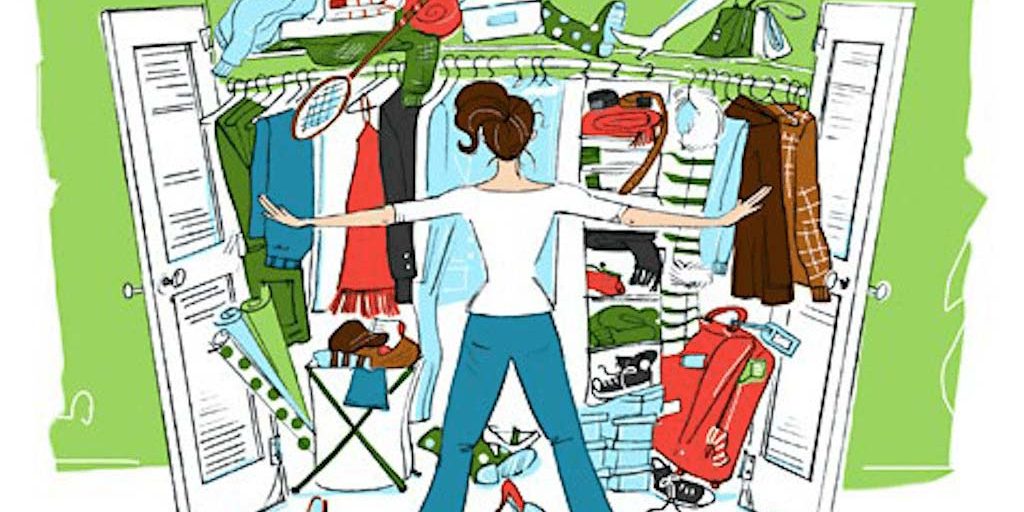 Everything in our life is in some way a reflection of our life. And by everything, I really mean every thing.

Our stuff has a tremendous influence over us – our thoughts, our feelings, even our mental clarity, or lack of it, as evidenced by TV shows that portray hoarders.

That’s because when hoarders over-accumulate, the hoarder no longer even sees the excess.

What they see is an extension of themselves to the point they don’t see themselves any more: they are one with the clutter. That’s why it feels like they’re cutting off an arm to remove all the junk.

Clutter has become a major feng shui focus in the past five or so years because it’s a source of stagnation.

Feng shui is a study of flow and when flow is stopped by a clot, especially in our veins, the formation of a clot can be life threatening. At its worst, clutter can overwhelm the people for whom clutter is out of control. At its best, clutter can be an annoyance.

But most of us live somewhere in the middle where clutter is concerned.

A form of chiropractic medicine that I’ve used in the past is called Network Chiropractic. It uses very light touches on the spine to help release past injuries, whether they’re chemical, emotional, or physical. That’s because your spine is the repository of all that has happened to you.

Network chiropractors believe that many illnesses and ailments are the accumulation of memories in the spinal network of nerves that are trapped, and that once released, the chronic physical condition can also be released.

Because our homes are a larger extension of our bodies, one could say the same about our clutter: that it is a symbolic representation of our lives and that by releasing it, we can move forward in our lives.

Could your clutter be saying something about your life? Below are some observations about clutter and what your stuff could be saying about you.

These represent parts of your life that are hanging in the balance, undone, and incomplete. If you have a number of unfinished items and see them frequently, it’s possible you feel like you’re not moving ahead in life and unable to bring important things to fruition.

That’s because these items represent being stuck. By parting with unfinished objects, you can help bring completion to your life, making your affairs smoother and less prone to getting hung up and remaining in limbo, and getting that unfinished business finally wrapped up.

These kinds of items are symbolic of feeling incompetent, unloved and flawed. Keeping these kinds of objects represents the inner pain of the lack of self-worth. Holding on to broken objects represents all that’s wrong with you – even though that opinion is incorrect. You aren’t flawed and by removing flawed items from your life, you gain greater self-worth and appreciation.


Is your home filled with cast-offs? Then you’re living a cast-off life. It’s like living your life through another person and not fully embracing your own life and your own feelings. It can often be rooted in feeling unnoticed, unworthy or of little value. If you buy lots of second-hand items, you might want to ask yourself why you’re not good enough.

I know someone who only buys used clothing and jewelry because she doesn’t think she’s worth the expense of new clothes and because her husband would be angry if she did. But she buys a lot of it and is overrun with used clothes and secondhand jewelry.

I asked her to start buying only brand new clothes and to remove all the old clothes from her closet. Her husband also had not bought her an engagement ring and she suggested that for their anniversary they do so. Once she did this, her self-concept and self-image changed, and her husband’s attitude toward her changed as well. Sometimes the ripples we want in our lives must be self-generated and radiate from the inner to the outer — not the other way around.


Holding on to items that are painful to you is self-flagellation and keeps you stuck in an emotional no man’s land. Holding on to painful items dulls your emotions and enjoyment of life so that living becomes marking one emotionally numb day after the other.

One woman I know had a particularly painful marriage. She and her husband went through many trying years in their relationship and the start of it began was their wedding. For that reason, her wedding dress was a source of pain and she cringed every time she opened the closet door and saw it.

Fortunately, their relationship changed and they became very happy, but the dress was a reminder of the pain of their early relationship and while she was happy, she was still emotionally restrained. One day she decided to get rid of her wedding dress and once she did she said she felt like she was not only happier in her marriage but was finally able to move on from that painful time. Holding on to painful items is like putting a bandage on a splinter instead of removing it. Remove the painful item and you can begin healing.

Too many itty bitty things mean an itty bitty life. If your clutter consists of lots of small things – especially small purchases – it means there’s nothing big or substantial in your life. Many people justify buying lots of trinkets because they don’t have the money for something big, like a house or a car.

The irony is that frittering money on a collection of tiny things means you don’t have room for accumulating the kind of money to buy something big. Once you can stop buying and filling up your home with all those little things, the big things can come into your life.