Everyone is working more. With the availability of cell phones, broadband, home offices, and Internet access at malls and coffee shops, you could just about say that wherever we are, that’s where our office is.

Because we’re working around the clock, in many instances, good office feng shui becomes vital — especially when it’s your home office.

Today many people spend more time at work than they do at home — and that goes double for home office workers.

Contrary to popular thought many home office workers put in longer hours than their cubicled counterparts.

Your home office, if it’s well arranged, can make you more productive and successful. If not, you could suffer from a number of problems that range from lack of recognition and support to politicking and gossip to possible layoff.

Or, you might just have career malaise whereby your career is still plugging along, but it just isn’t as good as it could be.

That’s what happened with Barbara, a sales director for a family of radio stations and a single mom. While her job was secure, she couldn’t help but worry since she was the family’s only source of income. Sales were slowly slipping at a time of year when they are usually quite high.

The problem? There were several, really.

Look at the office arrangement below and see if you recognize any of these problems with your own office. Then take a look at how in just a three short hours we completely re-arranged her office to put her in a “command” position in her office — and her career. Sales rebounded and she no longer worried about being fired. 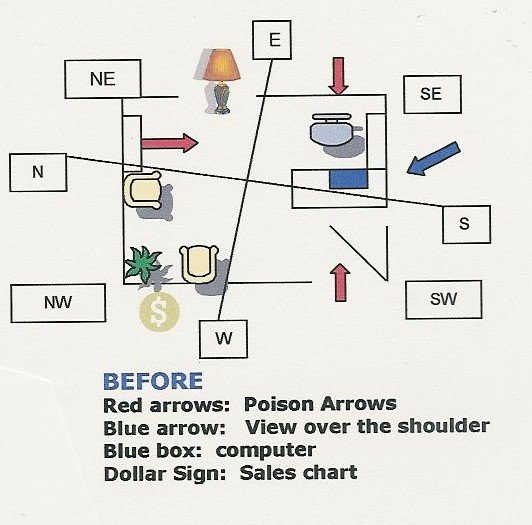 As you can see, Barbara was directly facing the door, the source of a very serious poison arrow. Being situated this way is much like sleeping in line with the bedroom door: it’s the “death” position for your career. 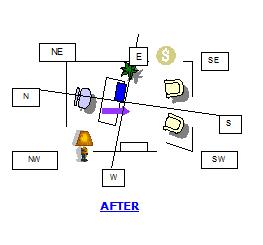 As you can see, the desk was arranged so that Barbara has a solid wall behind her with the two chairs directly facing her. She is also facing the window and the lamp has been moved to the S-SW position.

Here are some of the other changes we made:

You’ll notice that Barbara’s home office is now much more inviting and balanced. Opening up the office entrance invites Sheng Chi (harmonious success energy) and it can now meander into her office and settle here. This is called the bright hall space and it brings opportunities and flow into your workspace — and that means more money.

Take a look at your home office and see what you can do to improve your effectiveness and your profitability.

Feng Shui Support from the Cosmic Tortoise – 6 Ways to Grow Your Income
July 5, 2022

The 5 Essential Feng Shui Power Cures
April 28, 2020
Looking for something?