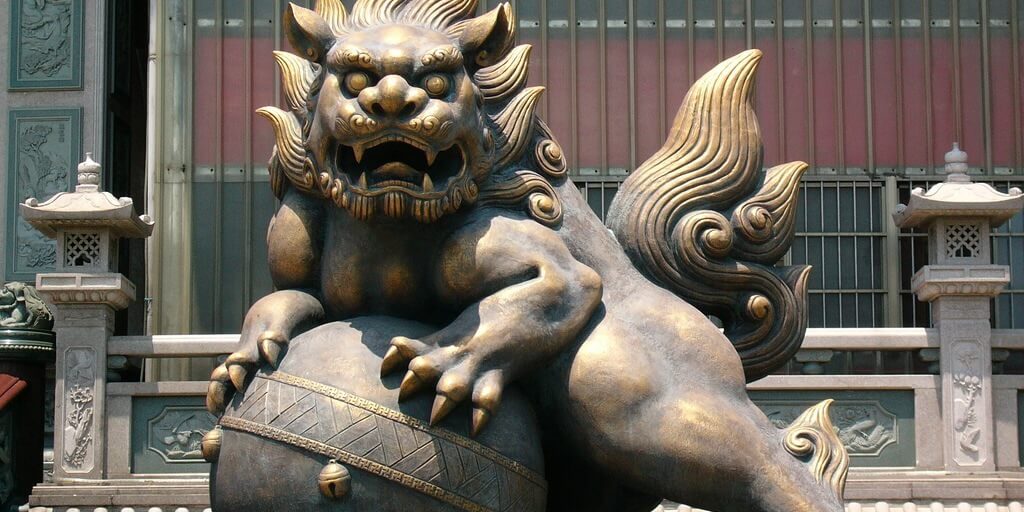 Animals figure prominently in feng shui and in Chinese lore. Although the dragon is widely known, there are other animals that are less well known but whose influence creates great luck and good fortune.  Below is a listing of animals and their feng shui meanings. Placing one of these animals in your home or office can often bring you business opportunities, improve your health or help you protect your money. See which one you like best!

These are the animals associated with the four cardinal directions and the four greatest aspirations of health and family (dragon/man), career and money (tortoise), success and good family name (phoenix), and protection (tiger/woman).

Dragon – Everyone knows this is the prime animal of China and feng shui. It’s associated with prestige, success and strength. It’s also a powerful animal of rejuvenation. This was once the symbol representing the male energy. Display in the east.

Tiger – The tiger represents the yin energy and with protection, courage, and strength. It is located in the west, or right side of the door as you look out. This is a symbol that should be used cautiously, if at all, and if so, only out doors to protect the residents of the house. A good substitute for protection is leopard or tiger striped fabrics or upholstery as this evokes protection without becoming overwhelming.

Rhinoceros – The rhino was once native to China and is now extinct there. Its horn was a symbol of scholarly luck and good character. They are now most commonly displayed as a protection against robbery, backstabbing or illicit behavior.

Lions – Stone lions have long been used as guardians for temples and graves.  The lion is also used in the lion dance with coins thrown to appease it.

Fu Dogs – Looking very much like a lion, fu dogs are typically guardians in front of homes or businesses and are meant to intimidate negative energies and keep malevolent forces from entering the house. They’re often shown as a pair, male and female, the male playing with a ball and the female with her foot on a pup.

Elephant – The elephant is both a protective animal, and also a wish-granting and holy animal. The elephant often stands guard at entrances to protect the inhabitants, displayed in the bedroom of a woman wishing for children, it is believed will promote the conception of a male child. The elephant is a symbol of strength and good fortune and the ability to grant wishes. White elephants are especially auspicious and bring great luck.

Chi Lin – The chi lin are often called Chinese Unicorns. They have the same cosmic breath as the dragon and bring good fortune to those who display them. It is a happy creature and is often displayed by childless couples as legend has it that chi lin bring children, displayed at work for a happy workplace, and brings advancement and promotions at work, especially among police and military. The chi lin also brings scholastic luck and luck to children.

Deer – The name deer in Chinese sounds like the word for wealth and prosperous income. It is a symbol of long life and having a deer figure means long, prosperous life. Business people should display images of deer for this reason. A good gift for a working person or someone starting out in their career.

Dragon Tortoise – Like its cousin, the tortoise, the dragon tortoise is a favorite of business and career minded people.  It represents wonderful good fortune, income, and prosperity. It combines the strength of a dragon and the protectiveness of the tortoise.  It’s best to place this symbol in the east or behind you at work.

Frogs and Wealth Toads – Always knowing where the water is (wealth), the frog is the quintessential wealth animal in feng shui. Display on a table looking toward the door.

Horses – Horses, and specifically, tribute horses, were given laden with gifts and offerings from the competitor beaten in battle, and signifies beating the competition and reaping the rewards. It’s a symbol of rising in wealth, prestige and promotion.

Moongoose or Rat – Often shown spouting jewels, the mongoose and rat are associated with wealth and ability to bring good luck and overcoming bad luck and misfortune and can turn around luck from offending the Grand Duke Jupiter.

Wishfulfilling Cow – Cows bring riches and can bestow good luck. An image of a cow or bull brings good luck to the family and grants wishes.

Pi Yao – Reputed to only eat gold and never excrete it, the pi yao helps to amass wealth, such as savings, investments and stocks. The son of a dragon, the pi yao protects money and brings good luck for accumulating money.

Planning to go on a trip? 😍 These Feng Shui travelling tips will definitely help you make it more excited 👇Travel Rituals for Pleasure. For travel to the,🛫 South: drink one glass of water or wash your hands before leaving the house🗻 SW or NE: Carry a cowrie shell for protection or tie a red ribbon on the handle of your suitcase for protection while traveling, or display a conch shell in the NW for more travel luck. I think those would be good to add and something people would likely do🧭 W or NW: Light a candle (red is best) or some incense, pointing them in the direction of your travel💕 E or SE: Ring a bell six or seven times in the direction you are traveling just before you leave🏄‍♀️ N: Put dirt in a small cup and throw it in the direction of north. You can also point a quartz crystal in this directionRead in detail at redlotusletter.com/travel-feng-shui-brings-luck-and-protection/#redlotusletter #fengshuitips #fengshuikatie #fengshuilifestyle #fengshuiliving #fengshuiyourlife #fengshuiconsultant #fengshui #watertiger #LifeStyle #positivevibes #positivelife #positivity #positivelifestyle #lifestyletips #ImproveLife #life #tips #traveltipsandtricks #traveltips #travel #travelingram #travelblogger #traveladdict #travelawesome #traveldiaries #travellife #travelmore #travelgram #travelgoals #traveling #travelling #travelbloggers #travelporn #traveltheworld ... See MoreSee Less