The wedding of England’s Prince William and fiancé Kate Middleton is the kind of fairytale that can buoy a world weary of conflict in the Middle East, devastation and nuclear catastrophe in Japan and a continuing conflict in Afghanistan.

A wedding is a joyous event that portends hope and celebrates a couple’s commitment to each other, something that is a foundation of family and society.

And certainly, after what’s already been a long and difficult beginning of 2011, having that one bright spot on April 29, 2011 at 11:00 am to hang our collective hopes on is something worth celebrating.

But what’s more than just a celebration of this couple, is the feng shui that surrounds them.

Like the couple themselves, this is a union of yin and yang, of positive and negative, of hopes and worries. To start with the date of the wedding is a fascinating one. April 29th is an eleven day. This is arrived at by adding the two plus nine together. This gives us the number 11.

In numerology and feng shui, the number 11 is called a master number because it is a source of illumination and those born on the 11th day or the 29th may be called to be of service in some grand way or inspire large numbers of people. Certainly, the wedding of Kate and William is expected to have over two billion viewers and that number of people in itself is inspiring.

The number two is also important.

The number 11 is represented by two single numbers that add up to two, although in feng shui and in numerology, an eleven is never added together. Nevertheless, this marriage of two single people will make a larger union once they have been married and the date certainly points to this.

They will change the monarchy and the way royalty are viewed and perceived, and will usher in a sense of calmness and leadership about the importance of love and respect for a loving union over a union for the sake of an heir and that transcends maintaining the royal lineage, something few people can relate to. Rather than a crown on head, their union puts love on the throne again.

As a couple, Kate and William are energetically matched.

She is an earth person, grounded and reliable. She will become the rock that anchors William’s life – and certainly she has already. She will provide that steady hand and outlook but will appeal to him with logic and clear-headedness. Her success comes from her ability to be a grounding force that magnetizes, even unites, opposites and helps to subdue dissension. The fact that she is a commoner might just be the common sense the royal family has lacked for so long.

William is a fire element person with a love of enjoying himself, yet he inspires Kate and makes her laugh. He will be a good husband for her and an ardent supporter within the family. His fire element will illuminate new ways of being royal but without sacrificing the family name. He will be keenly aware of his role in society and his lineage, yet also aware of his role of husband and father and how that is viewed symbolically in England and elsewhere in the world.

A romantic honeymoon location — or a more troubling locale? 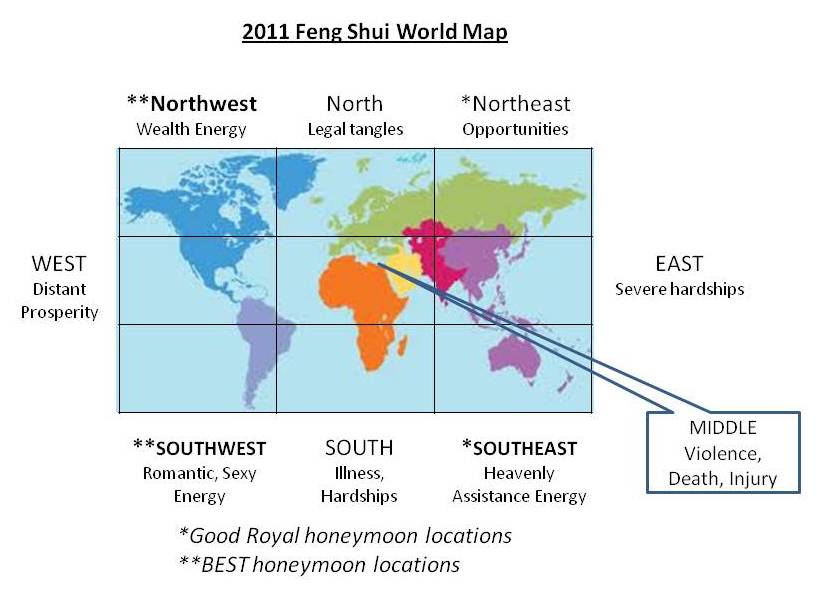 As for honeymoon, there are several places that would be wonderful choices for the couple that boast terrific feng shui this year. However, one of the concerns is that Kate might be interested in honeymooning in locations that are problematic.

The first is Jordan.

As a child, she spent part of her early childhood in Jordan and was rumored to want to return there for visits to ancient sites such as the city of Petra. This is quite dangerous as an affliction in the center sector of the world has borne the fruit of violence and security would be a serious concern.

Because this region is beset with a metal affliction, and because Kate wear’s Diana’s ring, who also died from metal in a car accident, this would be a dangerous choice. Another honeymoon location consideration is Mustique which falls in the west sector of the world when it is divided up into a nine square grid. This island would pose a variety of problems due to the Three Killings affliction residing there this year. Health problems, security issues, problems with communications could derail an otherwise wonderful honeymoon for the pair.

A vacation to Australia, Northwest Canada or Argentina would be the best locations for the royal honeymoon. The romance star is in the southwest this year and the couple could enjoy romantic nights watching tango dangers in Buenos Aires, or enjoying the beautiful Australian Outback where they would enjoy sublime heavenly luck.

Regardless of where they end up on their honeymoon trip, this is a couple that will show the world how a couple – even a royal couple – can live happily ever after. Certainly, that will be the hopes and wishes of the two billion watching the wedding ceremony this Friday. It certainly is mine.

Kathryn Weber is the publisher of the Red Lotus Letter Feng Shui E-zine and certified feng shui consultant in classical Chinese feng shui. Kathryn helps her readers improve their lives and generate more wealth with feng shui. For more information and to receive her FREE Ebook “The Cash Register at Your Front Door” visit www.redlotusletter.com and learn the fast and fun way how feng shui can make your life more prosperous and abundant!

Does Your Love Life Affect Your Finances? Feng Shui Says Money and Sex are Linked
August 1, 2022